The AEFA site was running Joomla 1.5. Earlier in 2014 this version was orphaned by the Joomla group and no more updates were available for it.

So the decision was made with the client to update it to Joomla 3.x.

To make the job easier I purchased a package called spupgrade.

A new Joomla 3.x is created and next the spupgrade package is installed like any other package. There are a number of options and these need to be filled in. Take care to make sure that the FTP and database details match the old site.

Once this is done click on Upgrade and watch your new site get populated with your old site's Joomla data.

Most of the settings, categories and articles should go over OK. Most, if not all modules will need to have newer versions found and installed. The only one that I know that is still Joomla 2.5.x is the File Remository. There are even new versions of Joom Gallery now for Joomla 3.x. I lost CK Forms and the membership form was redone using Jumi.

Next job was to choose a template and rebuild the site as required. Most Joomla 1.5 templates won't work with Joomla 3 and it will be hard to get a new version of your old template. It's probably easier to acquire a new one and enjoy a new look too.

All of the articles should be there which would be most of the work if it was done manually. The menus need to be redone and it's a good idea to have the old site loaded to have a look at how it was done.

When satisfied with the new Joomla site cut it over (I just renamed the sub folders under public_html) and the old site can be removed. 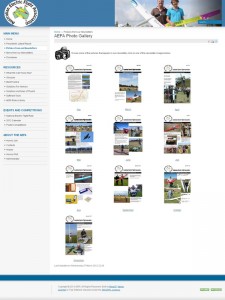 AEFA, The Australian Electric Flight Association, had an aging Joomla website that needed to be updated to a more recent version of Joomla.

The AEFA was using Joomla 1.0 and it was no longer supported, meaning important security updates were not being provided.

Joomla 2.5 could have been used but the extensions have not quite caught up this newer version. It was decided to stick with version 1.5 and use the supplied JA_Purity template. The only change done was to make the banner size higher and insert the AEFA logo. A rotating slide show would also look good here.

The AEFA site is a good example of how well clients can manage their own content, and this works especially well for organisations that need to publish specialised information. A number of users can be given access to the editing feature thereby sharing the task.

There a number of useful modules that can be used for clubs including the calendar which allows entry of events and so on.

The site can be viewed by going to www.aefanet.com

Let Rinet IT build your next website.
GET STARTED